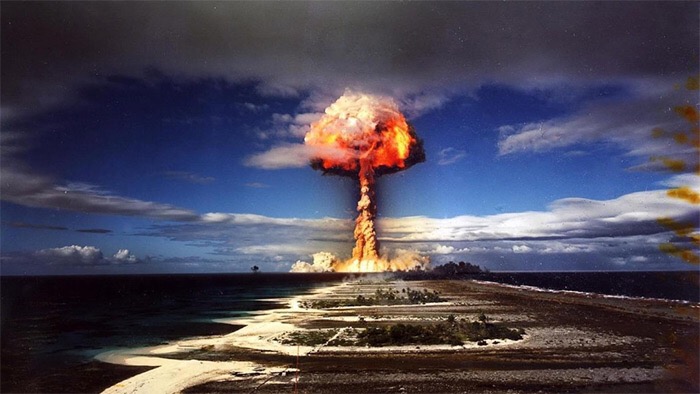 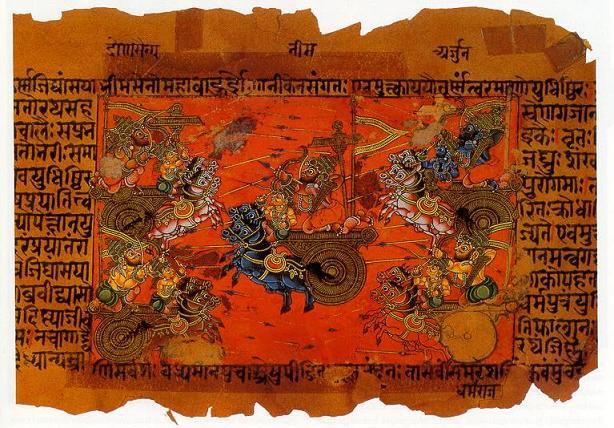 Ancient civilizations and pagan religions have left many mark in history with scripts, monuments and numerous objects that make us reevaluate what we know so far regarding our past and where we are going as a civilization.

The Mahabharata and the Ramayana offer many answers to numerous questions regarding our past, present and future.
The Mahabharata is one of the two major Sanskrit epics of ancient India, the other being the Ramayana. It consists of 100,000 verses divided into 18 parts or books that are equivalent to eight times the Iliad and Odyssey combined. these ancient texts are more than a historical narration. It is a combination of facts, legends stories and myths. A vast collection of didactic discourses written that were written in a beautiful language, nurturing all Hindu mythology and creating one of the major world religions: Hinduism.
Among those historical texts, we see a story of a devastation that occurred in the past, one that cannot be compared to anything else in the past, a devastation much similar to what we know today is destruction caused by nuclear weapons. Historian Kisari Mohan Ganguli, argues that the Mahabharata and the Ramayana are full of descriptions of large nuclear holocausts that are apparently of incredibly higher proportions than those at Hiroshima and Nagasaki.
When a student asked Dr. Oppenheimer if the first nuclear device that went off was the one at Alamogordo. during the Manhattan Project, he responded… Well … yes. In modern times, yes, of course.
The ancient Hindu text the Mahabharata:
“Gurkha, flying a swift and powerful vimana,

charged with the power of the Universe.
An incandescent column of smoke and flame,

as bright as ten thousand suns,

rose with all its splendor.
It was an unknown weapon,

a gigantic messenger of death,

which reduced to ashes

the entire race of the Vrishnis and the Andhakas.
The corpses were so burned

as to be unrecognizable.
Hair and nails fell out;

Pottery broke without apparent cause,

and the birds turned white.
…After a few hours

all foodstuffs were infected…

…to escape from this fire

the soldiers threw themselves in streams

to wash themselves and their equipment.”

issued forth upon creation,

A thick gloom swiftly settled upon the Pandava hosts.

All points of the compass were lost in darkness.

The sun seemed to waver in the heavens

scorched by the terrible violent heat of this weapon.
Elephants burst into flame

and ran to and fro in a frenzy…

over a vast area,

other animals crumpled to the ground and died.

From all points of the compass

the arrows of flame rained continuously and fiercely.” — The Mahabharata

There are many other references in the Ramayana which seem to be very similar to those described in the above texts. It is very clear that these texts allude to a great holocaust that killed thousands of lives. One that can be easily traced to nuclear weapons we use today.
But is there evidence, other than the texts supporting the theory that a nuclear device went off on Earth thousands of years ago? In 1992 researchers discovered in Rajasthan a layer of radioactive ash, covering an area of ​​about eight square kilometers, 16 kilometers west of Jodhpur. The radiation is so intense that it still contaminates the area today. Researchers excavated at Harappa and Mohenjo-Daro, discovering skeletons scattered throughout the area as if a sudden event occurred that devastated entire cities.
“(It was a weapon) so powerful

that it could destroy the earth in an instant–

A great soaring sound in smoke and flames–

And on it sits death…” . — The Ramayana
The site where researchers have found skeletons and remains of radioactivity is very similar to Hiroshima and Nagasaki, but with one striking difference: the radiation levels found at Harappa and Mohenjo-Daro were 50 times higher than the remains of the nuclear holocaust of Hiroshima and Nagasaki.
What really happened? Are the Mahabharata and the Ramayana really describing a nuclear device exploding on Earth tens of thousands of years ago? If so where id it come from? Ancient astronaut theorists are talking about a nuclear holocaust which happened around 12,000 years ago. An explosion that according to theories, created a crater with 2154 meters in diameter, located 400 kilometers from Mumbai.

The dating ranges from 12,000 to 50,000 years ago so researchers have a gigantic time frame to work with.