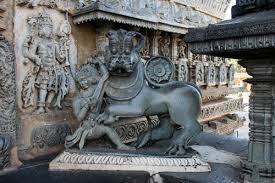 You wouldn’t find any information on dinosaurs or other similar species in any of the ancient western texts but it is in ancient Indian literary texts,dinosaurs and other species similar to dinosaurs could be found.
Makara
Sanskrit word ‘Makara’, meaning ‘spider’. ‘Makara’ was used to refer to a giant amphibian dragon that lived under sea. Was it a‘crocodile’ ? Not per description of ‘Makara’. Description and ancient paintings of ‘Makara’ across Asian countries like Cambodia, Burma, Malaysia, Indonesia, Thailand, Japan Vietnam and China presents a picture resembles dinosaurs.

‘Makara’ is depicted as the half aquatic-Half animal aggressive monster having head of a crocodile, tail of a peacock, small horns like that of a goat, body of an antelope and paws of a panther.

Makara(Dinosaurs) as the vehicle of…