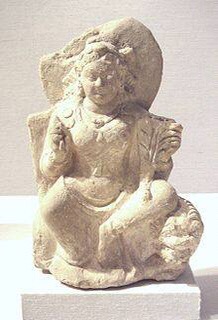 HINDU MOTHER GODDESS DURGA WORSHIPPED IN TURKMENISTAN , AFGHANISTAN & TODAY’S PAKISTAN?
A. ALL WERE HINDU LANDS ~ In Afghanistan she continues to be known as “Bibi Nanni” (“Lady Nana”) or “Hinglaj Mata”.Both are local names for Durga.
Mother Godess DURGA was known as “Nana” was also worshipped as Kushan female divinity from ancient Bactria, a variation of pan-Asiatic Nana, a conflation of Sumero-Babylonian Inanna-Ishtar with a local divinity, in her Kushan form with either the indigenous (Zoroastrian) Harahvati Aredvi Sura Anahita, or the Indic Durga-Saraswati, or both. Such syncretism was common among the Kushan deities.
Nana is depicted as a lion and also appears on the coins and seals of the Kushan kings, in particular of the mid-2nd century CE Kanishka I. The Rabatak inscription of Kanishka I invokes her as well. Her characteristics are martial in these depictions, and she was typically depicted as a seated martial goddess…